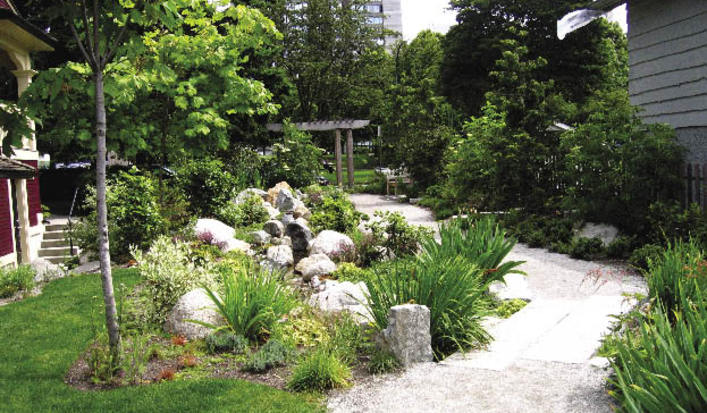 The Mole Hill Community Housing Society (MHCHS) is the result of a seven year campaign to preserve Vancouver's only intact Victorian and Edwardian neighbourhood. The area was originally earmarked for demolition but, in 1999, residents of the 148 city-owned affordable rental units, and affordable housing advocates convinced City Council to preserve the heritage block for social housing. The city, in partnership with BC Housing and the MHCHS, approved a project to renovate 27 of the heritage homes into 170 units of non-market housing, with an additional house and a new building developed as a day centre for people living with HIV/AIDS.

Mole Hill has been identified as a model for social and environmental sustainability. It has preserved a stock of affordable rental housing with significant heritage value on the edge of Vancouver's downtown core, while also incorporating sustainable building practices, traffic demand management, and increased open space. The development reduced waste by retaining 60-70% of the original construction materials.

The renovation of the houses cost approximately $28 million, in the form of a loan which MHCHS is repaying. The city also granted, at no cost, a 60 year lease of the land to MHCHS worth $13.5 million.

The renovations upgraded the energy efficiency of the homes with low-energy light fixtures. A geothermal energy system, which uses the earth to cool and heat homes naturally, was also installed. This system reduces operating costs 50-75% over conventional systems. It also reduces the production of greenhouse gases.

MHCHS has also entered into a partnership with the Co-operative Auto Network (CAN) to reduce the number of vehicles owned and operated by residents. CAN has four dedicated stalls in the laneway. The number of parking stalls has been reduced from 100 to 28 and the laneway has been reduced in width from 10 m to 6 m. This space was used to create a community garden with edible plants and a water feature which retains and recycles stormwater. Permeable pavers are also used in the laneway. A greenway passes through the site at the mid-block.

Tours: Open to the public

This post was imported from the 'Greater Vancouver Green Guide', it's part of the 'Green Guide Portal' to the Green Building Brain